Mr James and Mrs Joanna Whitehead, owners of the world’s largest jigsaw puzzle –  about 6m wide and 1.5m high when assembled, and 32,256 pieces, donated it to Bridgemead today.

Mr Whitehead says: “My wife Joanna and I were one of the first to complete the puzzle in the UK not long after it came out. We have only made it once after which we took it apart in large panels and put it into bags back into its rather large box. Rather than selling it on, we wanted to find a community group that might enjoy assembling it and are very happy to give it to Bridgemead.”“We bought the puzzle as a nice challenge and really enjoyed chatting together as we put it together. It took us 8 weeks in total to complete, but that was before we had children!” Mr and Mrs Whitehead enjoy a challenge, they set up the world’s largest Umbrella Dance in Laura Place in 2009 and the world’s largest Group Waltz in Abbey Square in 2008.Their daughters Lydia (2) and Freya (14 weeks) joined them at the presentation. 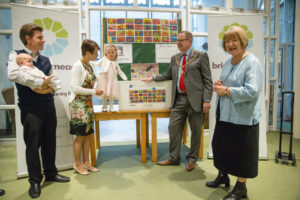 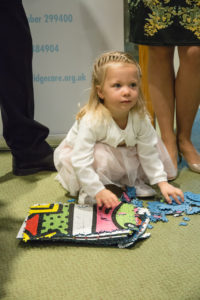 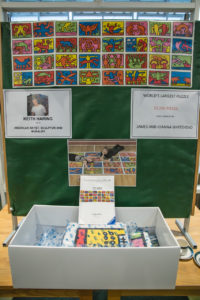 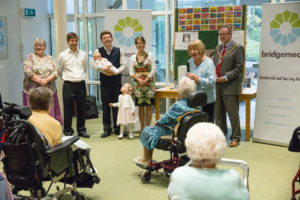 The Mayor of Bath, Cllr Ian Gilchrist thought of Bridgemead straight away when Mr  and Mrs Whitehead asked him to suggest a home for the giant puzzle. When visiting his mother in her care home he saw how much pleasure the residents gained from completing puzzles. He said “Bridgemead occupies a position of great respect and authority in the world of Care Homes, so it was the first place I thought of as a recipient for the puzzle.”

Marian McNeir, MBE, Patron of Bridgemead, said: “We are thrilled to receive this most unusual gift: the largest puzzle in the world, which even has its own trolley! It will great fun for the residents and we will also invite some of the children in local schools to come and help.  When completed we will be auctioning it at our charity auction at the Gainsborough Hotel on 7th March 2018.”

Listen to the interview on Radio Bristol on 20th October