All Posts in Category: Trustees

Geoff Weekes, Chair of Bridgemead Trustees, thanked all the friends and supporters of Bridgemead at the 25th birthday party held at Bridgemead on 23rd November. Around 60 supporters came including the Deputy Mayor, Councillor Rob Appleyard, who said  “I’ve visited Bridgemead several times and really feel the incredible warmth of the place.”

“This takes me back 25 years, going round all the churches with Ray King and raising money for Bridgemead to be built. It’s a wonderful place, and now I’m a potential resident…”

Ex volunteer Morfydd Jones agreed: “Bridgemead is such a happy place. I volunteered doing the trolley here for six years, but then had to stop when I got shingles. Now I’ve got my name on the list….”

A vast array of enticing canapes were provided by Una McCullogh and her team. Sally Fuller and Frankie Knapp who have visited Bridgemead for many years said it was a very good event and “the food was wonderful.”

Geoff Weekes said: ” We are so grateful for everyone for all their contributions, giving their time, money and prayers. Through your support many lives have been touched and elderly people have flourished.”  Marian McNeir, MBE and Patron of Bridgemead explained that her mother was a resident and she “spent her last years here being loved and cherished. My family is so impressed by all the staff and trustees who care so passionately and it is that passion which will help us realise our vision.”

Geoff Weekes went on to talk about the need for a new vision for Bridgemead which is informed by today’s needs – the rising river levels, and the increasingly complex care needs of the residents.

“Some of the people here have been involved since  Bridgemead was built, or even before that, and some are far more recent, but everyone’s contribution is so valuable. We are so grateful and it is lovely to see so many people here and feel the huge support for Bridgemead both in the past and in the future. We can continue to make a difference to the lives of our residents and their families, as well as to the community of Bath.” 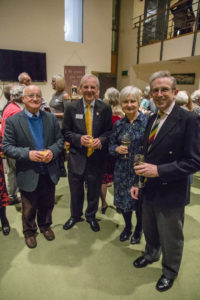 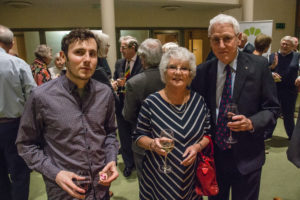 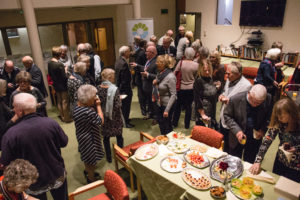 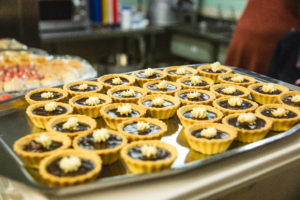 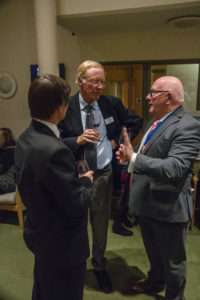 The trustees of Bridgemead Care Home are delighted to announce that planning permission has been granted to enhance and carry out a major upgrade to their current building in St John’s Road, Bath. The new wing will extend services for vulnerable older people in a dementia-friendly setting. The building will also be protected from flooding. The trustees need to raise £4,400,000 to carry out the work.

Stage 2. New South Wing £2,740,000
A new south wing will create an enclosed external courtyard and restructuring will provide 12 en-suite rooms which are dementia friendly, with new equipment such as bariatric hoists to help patients out of bed, and into a wheelchair.

A riverside lounge and an upgrade of five residents’ rooms with en-suite facilities, and upgrades to the main reception area are planned.

Geoffrey Weekes, Chair of the trustees, says: “We have a lovely home with caring staff and have maintained our values which are driven by the same Christian principles on which Bridgemead was founded. Yet we have to be realistic and adapt to today’s challenges. We are delighted that planning permission for our imaginative but sympathetic extension, designed by SRA Architects, has been granted and are excited to start fundraising.”

As well as extending the Care Home it will be protected from further flooding. On Christmas Eve 2013, the River Avon was dangerously high and was only 5 inches or 130mm from flooding the ground floor of Bridgemead. The 32 older Bath residents would have to be evacuated. How could this be done, and where could the vulnerable residents go on Christmas Eve? Fortunately, levels receded and residents and families could enjoy Christmas in the comfortable homely environment of Bridgemead. However, every time there is heavy rain, the manager, Pam Bourton, says “I have an awful feeling and worry we might have to consider evacuation procedures again.”

This threat coupled with more complex care needs in our older population often with increasing levels of dementia have been the spur to prepare vital new building plans.
The plans also incorporate a community suite where services can be offered to older vulnerable members of the community who are not residents.

Geoff Weekes, Chair of Trustees of Bridgemead Care Home, has received the prestigious Citizen of the Year award on Thursday 18th May at the Mayor’s Parlour.

The Mayor of Bath’s Citizen of the Year Award recognises exceptional volunteers who have made an enormous contribution to the lives of those living in the city. Geoff Weekes has been given the award for his leadership of the trustees at Bridgemead Care Home and for overseeing the campaign to raise funds for a much-needed new extension. Geoff will receive his award from The Mayor, Councillor Paul Crossley, at a special ceremony in the Mayor’s Parlour on 18th May.

Marian McNeir, who nominated Geoff Weekes, says “Geoff has been involved with Bridgemead since it was founded 25 years ago, through his friendship with Dr Ray King, a Bath GP, and members of the Widcombe Baptist Church. Together, they pledged to offer the highest quality of care for local people, whatever their faith, social or financial circumstances. They raised funds and commissioned Feilden Clegg Bradley to design and build their iconic building on the banks of the Avon. Geoff has been a Trustee since December 2003 and was appointed Chair of the Trust in July 2012. He has given selflessly of his time and energy to lead the very able, committed team of trustees and make a huge difference to the lives of older, vulnerable residents by enabling them to flourish, and so realise Dr King’s vision. Residents are from all over the city of Bath and that’s why I thought Geoff would be an excellent candidate for the Mayor of Bath’s citizen medal.”

Geoff Weekes says “I’m very honoured to receive this award. It has been a great privilege to work with my fellow trustees, staff and volunteers to maintain a lovely home with values driven by the same Christian principles on which Bridgemead was founded. We really value the recognition and support of the Mayor at this crucial time as we have just submitted plans to carry out a major upgrade to our current building in St John’s Road, Bath. The new wing will extend services for vulnerable older people in a dementia-friendly setting. We will also be creating space to realise our plan to offer more facilities for older people in the community. As well, the building will be protected from flooding. We will need to raise £4,400,000 for the scheme and are excited to start fundraising for these vital new building plans.”